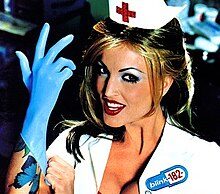 Blink-182 officially confirmed that guitarist Tom DeLonge has returned to the band. This comes after months of speculation.

Blink-182 plans to tour in 2023 starting with a run in Latin America. That will be followed by an extensive North American jaunt launching in St. Paul.  Then the band will head to Europe.

In 2015, DeLonge took an “indefinite” departure from Blink-182.
Less than two weeks later, Blink-182 performed their first show since DeLonge’s departure at the Roxy in West Hollywood with Alkaline Trio guitarist Matt Skiba.

The above photo is the cover from Blink-182’s “Enema Of The State.”