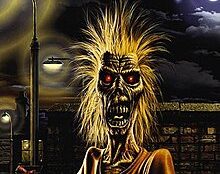 Iron Maiden recently completed its “Legacy Of The Beast” tour – the last stop (October 27th) on the American leg was at the Amalie Arena in Tampa in front of over 12,000 fans.

More than three-million people attended 139 shows in 33 countries since the trek began in Tallinn, Estonia on May 26th, 2018.

The tour’s run was delayed due to the global pandemic which led to the 2020 European stadium shows being rescheduled – often twice.

So little wonder it took over four years to wrap up.