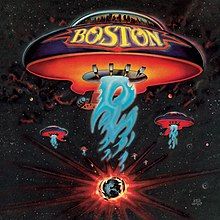 Thinking about becoming a Rock star? There are two ways to go.

First, you can develop your sound from one album to the next delivering one creative high after another. Trouble is, you may run out of ideas or lose your audience in the process.

Or you can do what Boston did. Release a studio effort once a decade that sounds exactly like the last one and get discovered by a whole new audience. Of course, the old audience, so burned out from listening to the last album, will eagerly devour the ‘new’ product.

Boston guitarist/leader Tom Scholz was one marketing genius. A mechanical engineering wiz, Scholz and band basically recorded the first album in his basement. Then he got Epic Records interested and re-recorded it in L.A.

Boston’s next album was “Don’t Look Back,” released in ‘78. Things were pretty much still on track with the title song being the best thing on it.

While nowhere near as accomplished as the first set it did well enough for Epic to consider Boston one of its core acts. And core acts had to produce. But Scholz was not a man who liked to be rushed.

Here’s what happened in the world between the release of “Don’t Look Back” and Boston’s next effort, the aptly titled, “Third Stage.”

Prior to “Third Stage” there were some personnel changes. It seemed some band
members were just as anxious as Epic about Scholz’s activities – or lack thereof.

The ballad “Amanda” was a pop hit – big time. Overall, the album was every bit as good as “Don’t Look Back.”

In ‘96, right on schedule, Boston, with more personnel additions and subtractions, released “Walk On.”

Critics chided Boston for being a formula band. And that may be. But before the formula got run into the ground (thanks to both the band and FM radio) it was something to behold.

Years in the making, as it is with all Boston albums, “Life, Love & Hope,” the group’s sixth full-length set but their first release since ‘02’s “Corporate America,” dropped in ’13.

Prior to the album’s release, Scholz stated that the album would not contain any Delp vocals – he had committed suicide in ’07. However, the end product did. Additional vocals were provided by Kimberley Dahme, David Victor and Tommy DeCarlo.