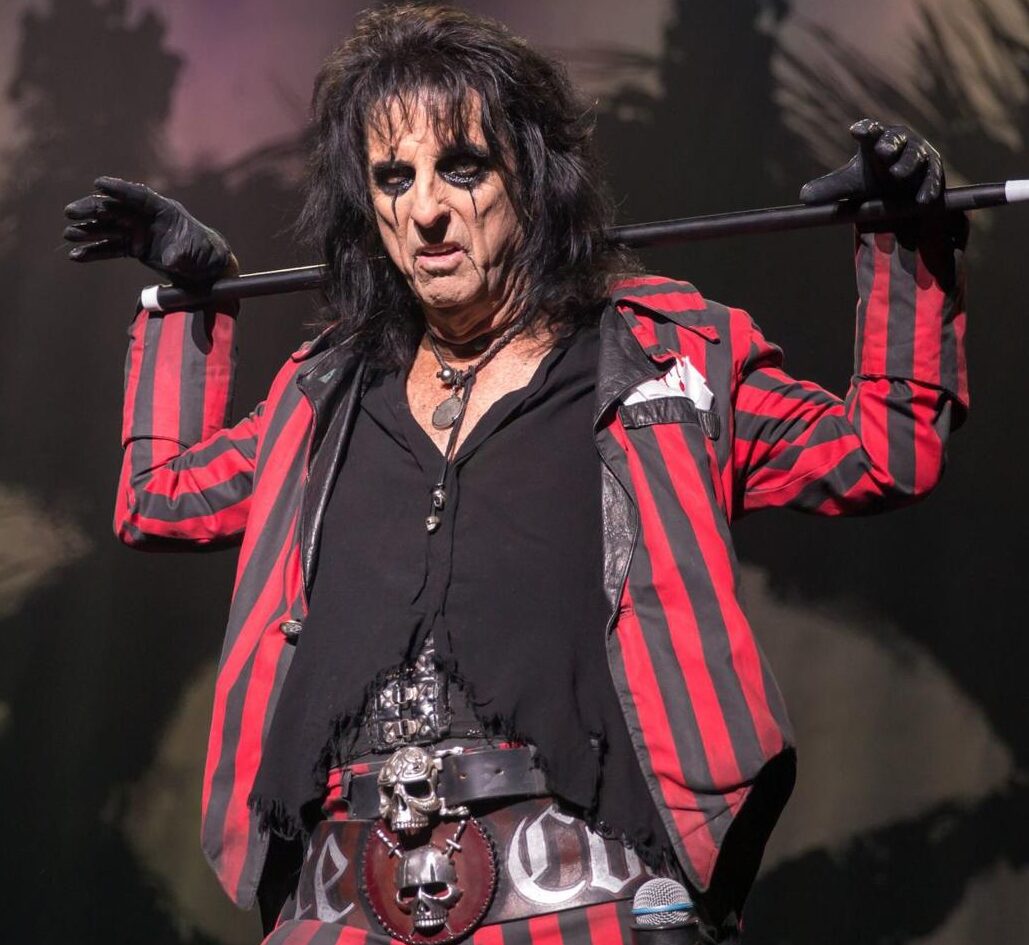 Let’s clear up one thing right away. Alice Cooper is the name of the band AND its lead singer. Alice Cooper the band – lead guitarist Glen Buxton (who passed away 10/19/97), rhythm guitarist Mike Bruce, bassist Dennis Dunaway and drummer Neal Smith – backed Alice Cooper, the singer.

A minister’s son the singer was born with the unlikely moniker of Vincent Furnier back in ’48 (February 4th).

Possessing a knack for cranking out third rate covers of the Rolling Stones, The Who and Yardbirds the band rather quickly evolve into the founders of Shock Rock. From an Ouija board came the name Alice Cooper. Or so the story goes.

Alice Cooper relocated to LA and signed with Frank Zappa’s label. In that environment every bit of weirdness was encouraged. But after two albums nothing seemed to jell so the group left Tinsel Town and moved to the heartland, Coop’s hometown – Detroit. Playing long and hard, and heavily influenced by the MC5 and Iggy Pop and the Stooges, Alice Cooper was ready.

Driving guitars propelled teen or anti-social (usually the same thing) anthems. Even though the band’s high school days were way behind them, they knew how it felt to be unpopular, left out and constantly put down by the “in-crowd.” And they never forgot.

Alice Cooper (the singer) had a snarling voice and wild, out of control demeanor. The stage act grew with the band’s success and excess.

The stage show included a gallows and Cooper’s “execution.” However, an Atlanta court ruled that Cooper couldn’t use feathers, an electric chair or a gallows during their show in that fair city. Why bother?

A boa constrictor was wrapped around Cooper in something just short of the death grip. The snake was an indispensable part of the act. And that was what it was. An act. It was a ’50s horror movie with a hard Rock beat. Nostalgic yet contemporary, shocking but often performed with a wry sense of humor. A startling, compelling combination. You had to watch. By being the anti-role model, Alice became THE role model.

As eighteen-year-old boys were registering for the draft and the possibility of being sent to fight in Vietnam, Alice Cooper released the empathetic “I’m Eighteen.” As summer approached “School’s Out” vaulted up the charts. When the ’72 election loomed Alice Cooper threw his hat into the ring with “Elected.”

One Cooper hit not connected to a specific event was the sneering “No More Mr. Nice Guy.” “It was me screaming back at the public,” said Alice several decades later. “At the time I was guilty of every single thing that was wrong with America. And it ended up being one of those songs everyone connected to.”

“Killer” features the potent “Under My Wheels.” From the opening guitar riff to the fierce horn-driven chorus, not to mention Cooper’s in-your-face vocals, this was a perfect introduction to Alice Cooper’s world. “Be My Lover” smartly addresses the inherent gender confusion and the band’s dismissal of it. The album also contains one of the few Hard Rock westerns in “Desperado” (not The Eagles’ song).

“School’s Out” has the title track, Alice Cooper’s biggest hit, but there is so much more. “My Stars” and “Public Animal #9” are excellent with lyrics promoting Cooper’s emerging seditious persona. They even take the “Jets Theme” from “West Side Story” and gave it some real venom.

“Billion Dollar Babies” has the most hits, “Elected,” “No More Mr. Nice Guy” and the ballad “Hello, Hooray,” another show tune.

Not too far into the ’70s Alice Cooper (the group) was having trouble functioning for all the usual reasons. Alice Cooper (the singer) dumped the band and went solo taking the name with him. The band re-surfaced momentarily as Billion Dollar Babies.

After spending a considerable portion of the decade in a haze, Cooper checked into the Betty Ford clinic. Emerging, he restarted his career for the long-term.

So much of what Alice Cooper started has shown up repeatedly. Marilyn Manson and Rob Zombie are two of Cooper’s more obvious offspring.