It should be noted upfront, The Eagles have the best-selling album of all-time “Their Greatest Hits (1971–1975).” But that’s hardly the end of the story.

The Eagles had two distinct periods in the ‘70s – the “Hotel California” album was the dividing line.

The first period had The Eagles” (’72), “Desperado,” (’73), “On The Border (’74) and “One Of These Nights” (’75) and established the band’s generally laidback sound. But there were those who preferred the raucous side highlighted by “James Dean” and “Take It Easy” but could live with the epic “Desperado” style ballads.

Then the Eagles veered toward a harder, more Rock sound on “Hotel” California” (’76) and “The Long Run” (’79). Both albums were million-sellers and it could be argued that the group was at the pinnacle when they disbanded following “Live” (’80). It was not only a long run but a good one.

After paying dues in several unsuccessful bands, Don Henley and Glenn Frey were asked to be part of Linda Ronstadt’s backing band for an up-coming tour. Also on board were the Flying Burrito Brothers guitarist Bernie Leadon and bassist Randy Meisner, who had been a member of Rick Nelson’s Stone Canyon Band. Along the way musician and future producer John Boylan suggested the four start a group.

A meeting between Frey (with the other Eagles present) and David Geffen at a house Frey was sharing with Jackson Browne, convinced Geffen to sign the band to his Asylum Records.

“Take It Easy” released in May of ’72 was the first single from the self-titled debut album. It was a great Rock song with just enough Country (there was a banjo in there) to sound refreshing. Co-written by Browne and Frey, it had already been released on a Browne album (his self-titled debut). But for the Eagles it was a perfect and successful introduction.

With a haunting sound, the slower yet dense “Witchy Woman” did even better. On the other hand, “Peaceful Easy Feeling” had a light, open and airy feeling. The sound got tagged as Country Rock, a term neither Henley nor Frey appreciated. They were a Rock group with Country overtones.

Rolling out ten months later “Desperado” was a mellower effort. “Tequila Sunrise” was a hit ballad. Over the long haul the song that had the most impact was the title track, yet another ballad. Though never released as a single received consistent radio play and was covered by several singers including Ronstadt. 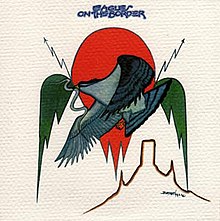 “On The Border,” hit the stores in ’74 and was the early Eagles’ most Rock oriented album. “Already Gone” scored with scorching guitars while “James Dean” was the ultimate tribute to the fallen actor (“too fast to live, too young to die”). Both songs had a driving rhythm and chord changes like a well-oiled machine.

The “Eagles Their Greatest Hits” was released and did good business. However, no one imagined it would hang on and do what it has done.

A fundamental change occurred when Leadon departed. His replacement, Joe Walsh, had been the driving force behind the James Gang and had a solo career going. He also shared the same management as The Eagles.

With a harder, darker edge (the Country influences in remission), “Hotel California” was a landmark album. The title track was a brooding, spooky guitar song building toward a fatalistic end (“you can check out any time you want, but you can never leave”). It soon became the most recognizable song in the group’s repertoire.

Meisner called it quits after a European tour citing exhaustion and was replaced by Timothy B. Schmit. The Eagles rolled out “The Long Run” album containing the title track, “Heartache Tonight” and the ballad “I Can’t Tell You Why,” with Schmit on lead vocals (he also co-wrote the song). All three were major hits.

Once all the solo projects were out of the way The Eagles regrouped and became one of the most successful touring acts in Rock.  They also established a “high end” of what fans would pay for concert tickets.