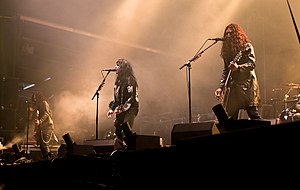 W.A.S.P.‘s headlining concert in Dallas (with Michael Schenker Group and Armored Saint in support) was reportedly shut down by the Dallas Fire Department just prior to the scheduled start because the 2,000 seat Amplified-Live venue was allegedly oversold by almost 1,200 tickets.

“Promoters didn’t think this band could sell tickets in the U.S. anymore. Well, it goes to show the absolute dedication of our fan base has here in the U. S.,” stated W.A.S.P. frontman Blackie Lawless.

The promoter stated the snafu was due to a “clerical error on the venue capacity certificate.”

Though no make-up date was set, Lawless promised W,A.S.P. would return to Dallas and those in attendance would receive a full refund.