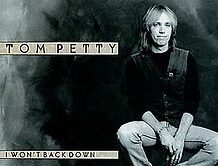 The official Tom Petty Twitter account has released a statement that reads: “The Tom Petty Estate and our partners were shocked to find out that (the) song ‘I Won’t Back Down’ was stolen and used without permission or a license to promote Kari Lake’s failed (Arizona gubernatorial) campaign.”

Petty’s estate is going after Lake, a Trump acolyte and election denier, who continues to fight the election results that declared her the loser. Her team placed the song into a commercial implying she’s not done yet.

Petty’s music publisher, Wixen Music, says Lake’s use of the song is “an insult to Tom’s memory, his lyrics and music.” They have issued a cease and desist order.

Obviously, Petty’s reps believe that Ms. Lake needs to back off on using “I Won’t Back Down.”