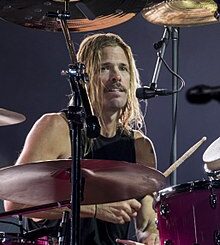 “For those of you who knew hm personally, you know that no one else could make you smile or laugh or dance or sing like he could,” said Grohl. “And for those of you that admired him from afar, I’m sure you’ve all felt the same thing,”

The first song the Foo Fighters played since Hawkins’ passing was “Times Like These.”

Wolfgang Van Halen and Justin Hawkins (The Darkness) were part of a group that played a Van Halen set featuring “Hot For Teacher.” Van Halen played guitar with Grohl on bass and Queens Of The Stone Age’s Josh Freese handling drums.

16-year-old Shane Hawkins sat in for his late father playing “My Hero” with the Foos. He ended the song with a drum solo.

Taylor Hawkins, who was inducted into the Rock and Roll Hall of Fame in ’21 as a member of Foo Fighters passed away on March 25th, earlier this year, at age 50 in Bogota, Colombia while on tour with the Foo Fighters.

A second tribute concert is slated for September 27th in L.A.