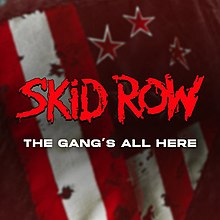 The current members of Skid Row performed the song “The Gang’s All Here” at Avicii Arena in Stockholm, Sweden on 11/17 as part of a special event celebrating 100 years of Swedish ice hockey.

The Swedish Hockey Team won Gold medals in both the 1994 and 2006 Olympics.

“The Gang’s All Here” is the band’s first single from their upcoming sixth studio album of the same name.

It’s the first song to feature frontman Erik Grönwall following ZP Theart’s dismissal from the band in March of ’22.