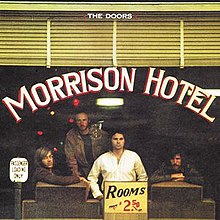 When it came out many critics viewed “Morrison Hotel/Hard Rock Cafe” as a comeback album. Singer Jim Morrison’s impressive arrest record and legal proceedings kept the band inactive for months. Also, they had produced two disappointing albums (“Waiting For The Sun” and “The Soft Parade). So now it was do or die.

“Morrison Hotel/Hard Rock Cafe” is the most Blues drenched recording the group’s catalog. Also, Ray Manzarek ditches his Vox organ in favor of a piano.

“Roadhouse Blues” is a classic. Down and dirty. Morrison even pulls off a Blues scat.

Led by Robby Krieger’s driving guitar, “Peace Frog” fuses three Morrison poems for an eerie trip through the past juxtaposed with contemporary scenes.

The capper comes during “Waiting For The Sun” when Morrison intones, “this is the strangest life I’ve ever known.” No kidding.