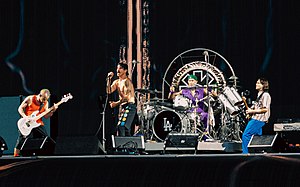 Red Hot Chili Peppers will kick off a North American leg of their world tour on March 29th in Vancouver, B.C.

“Unlimited Love” topped the Billboard 200 for one week on first week sales of 97,500 copies while “Return Of The Dream Canteen” topped the charts in six countries and peaked at #3 in the U.S.

On January 14th the Peppers, Fall Out Boy and Jack White will play the iHeartRadio ALTer Ego event in Inglewood, CA.