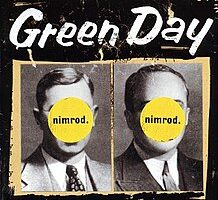 To celebrate the 25th anniversary of “Nimrod” (which occurred last October) Green Day presenting an expanded edition of the album complete with a previously unreleased demo for the song “You Irritate Me,” on January 27th.

The set includes the original album with a disc of previously unreleased demos and a full live show from Philadelphia’s Electric Factory recorded in ’97.  The show contains several “Nimrod” songs.

When originally released in ’97 “Nimrod” Rpeaked at #10 on the Billboard 200 selling 81,000 copies in its first week and remained on the chart for 70 weeks before being certified double platinum.

The album is best known for the acoustic single “Good Riddance (Time Of Your Life).”