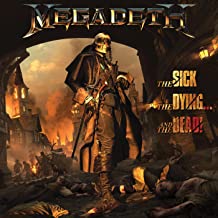 Megadeth "The Sick, The Dying… And The Dead!"

“After doing such great work on “Dystopia”… we’ve gone from being a club and a theater act to being an arena/amphitheater act and being a legit one,” says frontman Dave Mustaine.