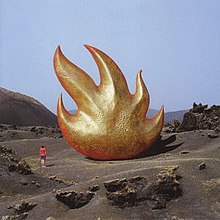 “The short version (of the song’s meaning) is just some guy sitting in a hotel room contemplating death and where you go and what it means and all the different possibilities of that, and then coming up with an image that he likes,” said Audioslave vocalist Chris Cornell.

Of course, Cornell ended his life in a hotel room (while on tour with Soundgarden) in ’17.

The song is on the group’s self-titled debut album (pictured), which came out in November of ’02.

Audioslave formed in ’01 with members of Rage Against The Machine and Cornell who had left Soundgarden (he returned later).