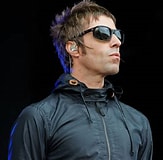 The film is based on the former Oasis singer’s two Knebworth concerts last summer and will be available for full streaming later this year on Paramount+.

The concerts came twenty-six years after Oasis played the Knebworth Festival twice in ‘96 for a combined 250,000 fans.

However, Noel Gallagher, Liam’s former Oasis bandmate, has blocked the use of any Oasis songs in the documentary.

Liam’s reaction to this was fairly typical.  He called his older brother/guitarist an “angry squirt” and a “horrible little man.” The brothers just don’t get along.