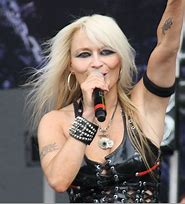 “Music Impossible,” a German TV show, challenges contestants to arrange and perform their own songs in the other artist’s genre. In this case Doro was up against German pop singer Mike Singer.

Doro created a ballad version of her classic “Raise Your Fist In The Air,” which is on YouTube, that became the favorite of the Berlin TV audience.

The difference between this version and the original is radical – like two different songs.

The pop version of “Raise Your Fist In The Air… In Heaven Mix” has been released as a single.