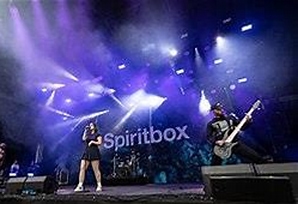 Spiritbox will embark on their first-ever headlining U.S. tour (with a couple of Canadian dates).

Spiritbox has released a handful of EPs with their full-length debut “Eternal Blue,” dropping in ’21.

The 22-date tour kicks off on April 10th in Vancouver, B.C. and wraps up exactly one month later on May 10th  in Minneapolis.

Tickets to go on sale on November18 th. VIP package are currently available..